Here is the unused content that came from the NES version of Action 52.

In Cheetahmen, each character has its own introductory cutscene. However, the cutscene for Apollo appears to have no text accompanied with the obligatory image. This is because Active forgot to put the alphabet characters next to the image tiles in the ROM. The unused text can be found in a memory viewer during the cutscene and Levels 5 and 6 of Cheetahmen.

French Baker has an unused, near-complete title screen using the Cheetahmen II font. It can be seen in the PPU as French Baker is loading.

For some reason, the code for French Baker is present twice in the ROM, once in its own PRG bank and once in the same PRG bank as Shooting Gallery and They Came. The latter appears to be an early version of the same game. It's noticeably glitchier, as it crashes whenever a projectile goes offscreen or you pause the game. It also contains different sound effects and an extra song on Level 1 that is unused elsewhere. The hidden title screen graphics aren't used though.

Like the example above, Evil Empire also has an unused title screen.

There is also an alternate font containing the letters "EVILMPR" in that order, which also went unused.

A set of numbers similar to the title font above, but lacking the shadow.

A large dragon/roc/genie included with the enemies. Possibly a boss, as it is close to 20 times the size of everything else in the game. The manual refers to a great genie, but whether or not this is it is unclear as it doesn't look much like anything. It's not known what palette it would have used.

Unused frames for the player/enemies. From left to right:

The genie bullets have a left-facing orientation, but only the right-facing one is used in-game regardless of the direction a bullet is fired.

The genie pots have three frames with different levels of smoke. The one with the least smoke isn't used.

Setting the value of RAM address $338 to 02 (or using the Game Genie code ZAOEAPAA) at the Rocket Jockey menu will bring the player to Level 3. This is a semi-playable level with a wrongly colored background and sprites that glitch out when certain enemies appear. There are also mountains in the background that don't appear elsewhere in the game, as well as projectiles that spawn periodically.

There was a contest planned where anyone who could beat Level 5 of Ooze would be entered into a drawing for $104,000. However, because this game is awful, Ooze locks up on Level 2 and hence it's impossible to complete.

This frog-like enemy appears twice with different palette indexes, as do many enemies in other games. None of the palettes match it very well.

Setting the value of RAM address $338 to 07 (or using Game Genie code YENEGAAA) at the Ooze menu) will bring the player to Level 8. This level is set in a different environment than the rest of the levels, taking place in the outdoors, with pink oozy things and the giant water droplets from Level 1. There's also a 1-Up which can't be collected. This was intended to be the last level before seeing the screen above.

There are a whopping 11 unused levels for Billy Bob, all of them inaccessible by normal means because of a bankswitch bug (the bytes written to direct page 0xFE and 0xFF, which trigger the bankswitch, are switched by accident, meaning the bank switch fails). Even if you beat all of the levels, the game will crash because of another bankswitch gone wrong. This game is the first one in the ROM, even if it isn't the first one numbered on the list. However, there are only four that can be accessed with the hex editor, but it won't be done in the same fashion as the unused levels in Ooze and Rocket Jockey. Also, expect this process to take a few tries, and have a save state of the game selection screen ready if you make a mistake.

Go to the game selection screen and scroll all the way down to the bottom of the RAM list. On address 0xFFE3 and 0xFFF3 (meaning they are right on top of one another), you will see just one "L". Highlight one of the "L"s and tap the spacebar fast and the game will boot up a green level in Billy Bob, without you picking the game. Do this again right after the level loads and the game will boot up a level with a pink color scheme, not used in any of the used levels. Do this one more time, and another green level will boot up. After this, there are no more. There is another pink level right after the first one labeled "Level 2", accessed after the first one's exit. After this, there are no more. 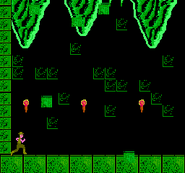 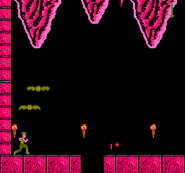 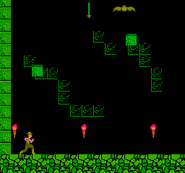 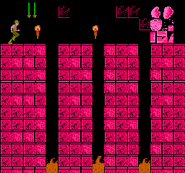 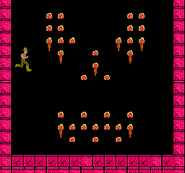 Add a photo to this gallery

Ninja Assaults' third and final level is plagued by graphical errors, which renders the graphics for the final boss unseen in any sensible manner during normal gameplay. Turns out it was a dragon.

There are also graphics for what may be a fire attack for the boss. The dragon doesn't actually do anything in-game except move in a triangle. The palette might not be accurate.

This stickman with a bunch of frames can be found in the graphics for Lollipops.

These snake-looking things are found in the graphics for Sharks.

These powerup graphics seem to be for Hambo, but the game only gives you one type of item, a 1-up.

This small guy and...thing can be found in G-Force Fighters graphics.

A smiley face. Everything you touch in the game gives you a frowny face and does damage to you (enemies, magic wands, bunnies, bags of money). It would seem that picking up money wasn't meant to be harmful after all!

Two battery sprites. The manual refers to collecting batteries, but none appear in-game.

By glitching the game with 001A:54, you can get these unused girl sprites to appear fully assembled and character mapped.

Additional orientations for the player sword projectiles. The game uses the up and/or right-facing ones for all directions.

A set of player sprites with a glow-like effect. The left and right orientations are incomplete.

A hurt sprite for Mash Man.

The eye enemies aren't animated, but there are three frames for them. The red and blue ones use one frame, and the pink uses another, leaving this one unused. The colored parts are actually repeated three times (they use the same outlines), once for each version. Therefore, two out of three frames for every one are unused, but aside from the red and blue enemies missing a single pixel tile from the frame the pink one uses they are identical.

Found among the background tiles. There are no spherical buildings in the game otherwise.

A frame of the player pacifier with the "head" squashed.

A plant enemy. It doesn't fit any palette all that well.

A sprite of the player turning.

Someone in a hooded robe. It doesn't have any animation, but it does have death frames.

The antennas from the player rover. The rover has its antennas baked into the graphics, not overlayed. There aren't graphics for a back-facing antenna for the rover.

Some object twice. The different colors would be used for palette swaps.

Although Star Evil is a vertical shooter, a few of the ships have partial horizontal versions. Some missing parts may have been filled by mirroring the graphics that are present, but even then some ships would be incomplete and/or missing the left orientation.

These tiles are repeated multiple times in the ROM and were used to test animations.

If you enter the second door in the second level it will warp you to level 3.

One for Active Enterprises, possibly for the sound driver, is at offset 0x80034.

Due to the way the Action 52 cart handles bankswitching, a few games had to be split up into two or more parts. Each of these parts is essentially a standalone game (hence why you can't exit Billy Bob from Level 3 onwards) and is based on the same code template as every other game on the cart. As a result, several ROM banks contain a default menu template which it says "GAME NAME ONE PLAYER TWO PLAYER MAIN MENU"

Retrieved from "https://action52.fandom.com/wiki/Action_52_(NES)_Unused_content?oldid=4478"
Community content is available under CC-BY-SA unless otherwise noted.